I began my education in cortical development in Sharon Juliano’s lab. She had a great group. Deb McLaughlin was mapping out the sensory system of adult ferret cerebral cortex through marathon Ephys recording sessions that each lasted well over 24 hours straight. I remember watching Deb’s masterful recordings non-stop all through the night. Her calm resolve was infectious. Omid Rahimi was testing transplantation of Nerve Growth Factor-secreting fibroblasts to restore activity to cholinergic forebrain nuclei. And Sid Palmer and I were using MAM treatment to create a ferret model of cortical dysplasia. In addition, we had the ever-present Don Eslin, the irrepressible Nate Scholnicoff, Donna Tatham, Tom Hasling, and of course Essie Jacobs, Becky Code, Glenwood Hill and many others. Like I said, it was a great group. Sharon set a wonderful example for creating a great environment for laboratory research. I was lucky to meet and work with these folks. 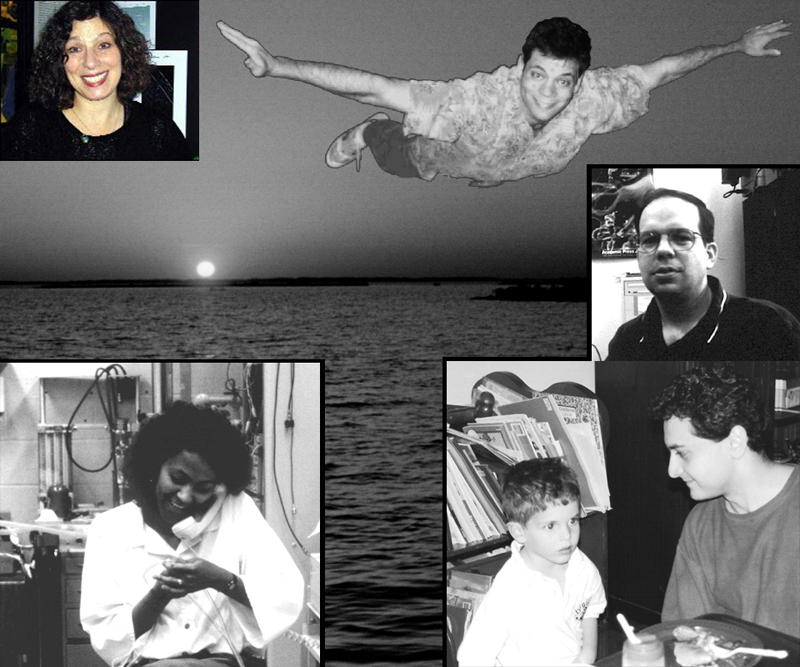 My graduate thesis studies focused on histogenesis of ferret somatosensory cortex. Several facets of ferret brain structure and development are unique in comparison to other animal models often used in developmental studies. For example, the ferret cerebral cortex is gyrencephalic, unlike the smooth lissencephalic cortex of mice and rats. 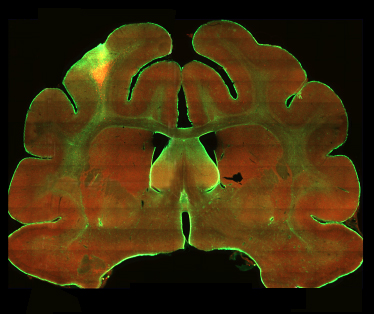 If you haven’t seen a ferret brain, the image to the right shows the degree of gyrification, or folding, of ferret cerebral cortex. In addition, cortical neurogenesis continues after birth in ferrets, while this process is complete by the time of birth in most mammals. Furthermore, while cortical neurogenesis occurs over a period of about 7 days in mice and rats, the neurogenic period of ferret cortical development is much longer, occuring over 4+ weeks. These differences provide distinct advantages for teasing apart factors that guide developmental processes in the forebrain.

Jackson, Peduzzi and Hickey published a thorough paper in 1989 detailing the temporal gradients of neurogenesis and neuronal migration in ferret visual cortex. Sharon, Nate and I published a paper in 1997 that determined when each layer of the cerebral cortex was generated in ferret primary somatosensory cortex. With that knowledge in hand, we used MAM to interfere with the production of specific cortical layers in ferret somatosensory cortex.

MAM (Methylazoxymethanol acetate) is a neurotoxin that reduces DNA synthesis by methylating DNA and has a half-life of about 12 hour at physiological pH. Our goal was to use MAM to temporarily stop cell division in the cortical proliferative zones during production of neurons destined for specific cortical layers. Since ferret cortical neurogenesis is protracted, periods of at least three days can be identified when neurons destined for a single cortical layer are being generated. It is therefore possible to target  individual layers.

MAM treatment on E34 disrupted production of layer 4 in somatosensory cortex, significantly reducing the thickness and the number of cells in layer 4. Not surprisingly, when Sharon, Sid, and Deb looked at adult animals they found that E34 MAM treatment altered the distribution of cortico-thalamic terminations, as well as the timing and flow of sensory information into somatosensory cortex and between cortical layers. 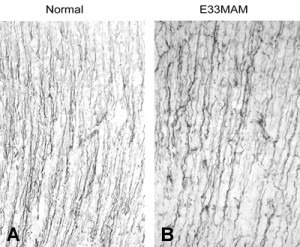 However, when we examined the neonatal brain, we saw that the E34 MAM treatment did not appear to disrupt basic features of developing cortical cytoarchitecture. Despite halting DNA synthesis at E34, the RG cell scaffold retained it’s fundamental morphology, and based on what we know now, the RG cells also appear to have retained their neuron generating potential since neurons destined for layers 2 and 3 were produced after the MAM treatment. The image on the right shows vimentin staining of P0 ferret somatosensory cortex in control and E33 MAM treated ferrets. The trajectory and density of radial glial fibers was not significantly altered by the MAM treatment.

We looked more closely at radial glial morphology by preparing acute slice cultures of embryonic ferret cortex obtained from control and experimental animals. We placed discrete injections of fluorescent tracers into the ventricular zone and kept the slices alive long enough for the  fluorescent dye to fill labeled cells. 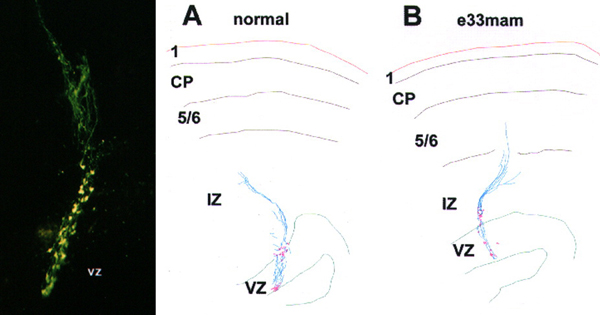 These were fun experiments for several reasons. The fluorescently labeled radial glial cells were just absolutely beautiful. The image above on the left was taken on a Biorad confocal, and while you can detect some features of the RG cells, it really doesn’t quite capture the beauty of seeing these cells in person on the microscope. And because Sharon really enjoyed working at the bench we did these experiments together. She made made the injections and my job included making sure the slices were healthy, monitoring CSF flow rate in the slice chamber, fixing the slices, co-staining with various antibodies such as vimentin to test for RG identity, imaging, etc. I’d then  use Neurolucida to trace the trajectory of the RG pial fibers in control and experimental groups. Panels A and B in the figure above show sample tracings of injections that Sharon placed in the VZ of control and E33 MAM treated animals.

MAM treatment at E34 reduced the number of layer 4 neurons, but left many features of cortical organization intact. In contrast, MAM treatment targeting earlier stages of cortical development resulted in profound disruption. Very thin cortical grey matter, multiple ectopic clusters of cortical neurons with abnormal orientation, Cajal Retzius cells distributed across the cortical wall rather than confined to the marginal zone, and RG cell morphology that was thoroughly altered. RG pial fibers were no longer oriented along a radial trajectory, there was a precocious onset of GFAP expression, and RG cells appeared to begin translocating earlier than normal.

The scope of these projects provided me with a solid foundation in fundamentals of cortical development, and I am of course forever indebted to Sharon. It also piqued my interest in radial glial cells and their translocation. Enough so that I included the slide below in my thesis talk.  Yes, I made that slide in Powerpoint….  don’t you just love the standard blue background / yellow text format? It’s screaming: I’m a child of the 90’s!! The question mark was meant to indicate “what happens next?” I’ve written a bit more on the story of translocating radial glia – including data from my first publications on translocating radial glia in 2004 and 2008 – in the ‘Time-Lapse Movies‘ section on this website. But there will be more to this story in an upcoming post. Stay tuned! 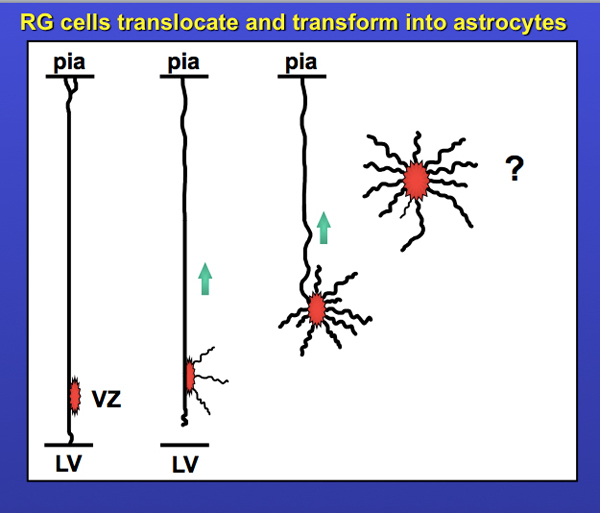